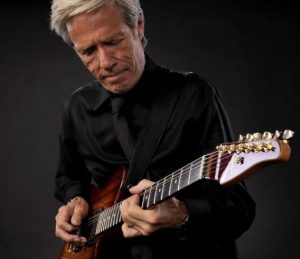 1. You were one of the founding members of Iron Butterfly and the architect of the original guitar sound. Tell us how your musical journey began before you ever played professionally.

I became interested in music at a very young age. My father, Johnny Weis, was a professional guitar player who worked with people from the Grand Ole Opry, Spade Cooley, Tex Williams, and even Johnny Cash. The great well known jazz guitarist, Barney Kessel, used to come to our home and trade licks with my Dad. Yes, Johnny was that good. I started playing accordion at the age of 5 and performed regularly with my father and mother and a bass player in various Christian churches in El Cajon, California.

From the age of 9 to 12, I wasn’t sure which musical direction I Hey would go. I even took drum lessons for awhile. I then decided to take up the guitar at age 12. My dad , Johnny Weis, taught me all the basics regarding how to play the guitar . He was an amazing guitar player and he was my mentor , my dad, and my friend . He told me that he didn’t want me to sound like anyone else and to sound like myself . I was able to successfully accomplish that . By the age of 13, I was playing gigs weekly and made enough money to buy myself musical instruments and even a car.

Thinking back, I guess the journey through the church circuit lead me to later be the Musical Director for various Afro American churches in the Los Angeles area. I thoroughly enjoyed the music and the message.

I met Doug Ingle whilst playing with my first bands in El Cajon. It must have been with The Progressives. I’m not sure who introduced me to him. Perhaps it was Kerry Chater (later became successful with Gary Puckett and the Union Gap and is now a prominent well known song writer and artist).

These were acts that my Dad was a part of the band backing them. I knew the necks on those guitars were very small. I like that idea because I had relatively small hands and I prefer small necks even to this day. In addition, I used a stand alone Fender Reverb unit which I had seen the pedal steel players use in the bands that my Dad played with.

I also used a Fuzzface distortion pedal. I’m not sure where I first saw that. It was the heavy distortion sound that I used. The overall band sound was a result of me and Doug Ingle basically. We did most of the arranging together.

As to changes in the personnel, no, it was not a result of moving from San Diego to Los Angeles. The original bass player, Gregg Willis, was not able to move from San Diego so we hired a guitarist friend of mine, Jerry Penrod, to play bass. We ask him if he wouldn’t mind playing bass instead of guitar and he said “sure man I’ll give it a shot”. As it turned out, Jerry was a fantastic bass player and went on to play with the band Rhinoceros with me. Jack Pinney was original drummer and I can’t recall how that happened with moving to Ron Bushy. Ron Bushy would be the one to ask that question.

As previously discussed, most of the arranging came between myself and Doug. Darryl DeLoach (RIP) loved Mick Jagger and did a great job of imitating his style on stage.

After having arrived in Hollywood, we ended up getting a record deal very quickly.

Being able to experiment with spacy sounds with my reverb and guitar. I would hold the guitar and play against a microphone stand much like a slide bar while recording

in the studio. I would also bang on my fender reverb with my fist and get odd sounds. The Fuzzface was a part too. I would also pick behind the bridge on the guitar. I had not heard anything from Jimi Hendrix at that time. So, those “metal” guitar sounds were in my own head. I was not influenced by anyone to do those sounds and styles.

I have no idea. Sorry.

At that time, Doug was the band leader and in charge of dealing with various nightclub managers in getting the band booked. He was the reason that I left. I disapproved of his methods and various other things that he was doing, and decided to leave the band. We bumped heads a lot. As a result of my leaving, Jerry Penrod and Darryl DeLoach also decided to leave shortly after. I wish Doug the very best and we are still friends.

They wanted to try to make Eric sound and look just like me. So, I sold him my guitar, my amplifier, my effects, and most of my stage clothes. They wanted to clone me actually.

Actually, if you listen to the rhythm parts, there is a lot of R&B influence on that first album. The bridge on “Look for the Sun” is one example. Also, Iron Butterfly Theme” has a funk bass and drums thing underneath all the ethereal Doug parts. All the R&B influences came as a direct result of me and my love for R&B and Soul music. Jerry Penrod also had R&B is his spirit for sure. There were a lot of large soul bands in San Diego County, some with 4 horns. Many were Hispanic and Black and wore black overcoats. I thought that was so cool. I liked the style, the music, the vibe and the look. I wanted to be in a band like that someday. That is where my love for R&B started.

Rhinoceros start it off in California and, after a short period of time, we move to the East Coast. We were based out of New York and played gigs in Connecticut, New Jersey, Massachusetts, Ohio Vermont etc. I left Rhinoceros after having been with them for about 3 – 4 years. Blackstone had members from Rhinoceros in it and was also produced by the late Paul Rothchild, the producer of Rhinoceros,

The Doors, Janis Joplin and more. Rhinoceros what a great R&B band. In retrospect, I wish we had stayed together. Wonderful musicians. I still do work with John Finley, the lead singer of Rhinoceros, to this day. We still write and record together. In 1968, I co-wrote the hit single, “Apricot Brandy”, while with Rhinoceros. I wrote the signature guitar riff and Michael Fonfara wrote the “horn parts” played on Hammond B3 and guitars. It reached #45 on the Cashbox and Billboard charts which was really impressive for an instrumental. It brings me revenue to this day I am happy to say.

After Rhinoceros, I joined The Rascals just after Buzz Feiten left. We were based out of NYC. Buzz was, and still is, a great guitar player and we remain friends to this day. Next was Lou Reed in 1974. I was the Musical Director for Lou and we did the “Sally Can’t Dance” album

followed by the “Sally Can’t Dance” World tour of Europe, then Australia, New Zealand, and lastly, the US. I played with Lou for a little over a year. Next, in 1975, I was asked to play with Alice Cooper for short time.

After that in 1975, I was asked by Alice’s manager Shep Gordan to join up with Burton Cummings. I recorded the “My own way to rock” album with him and we toured the US and Canada for about 2 years. Then, in 1978, I was asked by Paul Rothchild to be the Musical Director/Lead Guitarist/actor for the band in the movie “The Rose” with Bette Midler. That movie was nominated 6 times for Academy Awards. I would say that all of the endeavors were both artistic and economic. They all just kind of fell in place. I enjoyed them all

In 2004, I was playing at a nightclub in Toronto, Canada and this person came up to me and asked me if I had ever recorded an album before. He asked me if I would be interested in recording with him and his label. His name was Barry Lubotta. Barry owned Phase One Audio Group and Marshmellow Records. He wanted me to do an “easy listening” smooth jazz album. What you hear on my CD “Sweet Spot” was the result. I am happy with how it turned out and am thankful to Barry. The album got a lot of really good reviews.

Many people have asked me who influenced me as a guitarist. Surprisingly, aside from my Dad, it wasn’t guitar players. I used to listen to saxophone players like junior Walker and King Curtis for the phrasing of my solos. I would listen to pedal steel players from my Dad’s band and that influenced me to this day for all of my country playing including chicken pickin. Of course, my Dad’s “bebop” style of Country Western Swing is always a part of me.

I would also listen to keyboard players such as Billy Preston and try to emulate what he would he would play on a guitar. In addition, I would listen to many drummers and would try to emulate the rhythmic pattern on a guitar . I work very hard at playing the guitar and I still play every single day for 2 to 4 hours .

These days, I am very active in doing online recording for clients around the world . I still record CDs with and for clients. I do a few local gigs but not many as it’s hard to find what type of players that I want. I am VERY picky. Some of the guitar players I have listened to are Vince Gill, Brent Mason, Johnny Smith, Wes Montgomery, Herb Ellis, Tal Farlow, George Benson, Jerry Reed, Prince, SRV, Albert King, the guitar players with James Brown, and more. I seem to always have a bit of a chicken pickin vibe nearby. I love funk and R&B. When one hears me today, they will hear a very matured Danny Weis. I insist on staying in shape on the guitar. I do believe that I am the best that I have every been at my craft. I will continue as long as I am able. I thank God for my gift of music. I thank my Dad, “Smilin’ Johnny Weis” for being God’s “vessel” to introduce music into my life. Thank you for asking me to do this interview Scott.